The roots of Whitesnake began in the mid-70s when David Coverdale forged his solo career from the ashes of his time in Deep Purple. Coverdale’s first two albums, WHITESNAKE (1977) and NORTHWINDS (1977), were released under the his own name. From 1978’s SNAKEBITE to the present, the band was named Whitesnake. The early albums bore a striking similarity to that of David’s former band. Obviously being the voice of one of the premier Rock bands of the ’70s, the comparisons to Purple were easy to follow. As time marched into the ’80s, the Whitesnake sound became more Hard Rock compared to the Purple-ish combination of Rock, Blues, and Classical. My first Whitesnake album was SLIDE IT IN (1984), this album brought the band to the public ear from general obscurity.  When WHITESNAKE was released in 1987, the band and album were treated as newcomers to the game, even though this was the band’s tenth album.

‘Crying In The Rain’ starts the album with a howling Coverdale kicking into a monster Sykes riff. Right away you can hear that the album is going to sound BIG! It’s a mid-tempo grind that benefits from the serious guitar work of John Sykes, get 3:30 into the song for the solo, that is how it’s done! Serious vocal chops and a huge drum sound, Dunbar crashing the cymbals. My problem with this song has nothing to do with the performance, that is solid. My problem lies with the band lifting this song from one of their previous albums, SAINTS & SINNERS (1982), and remaking it. Another serious riff and howl opens up ‘Bad Boys’. This song showcases more of Sykes’ axe attack, there are layers of guitar that rival anything from that era. It’s a good song but only a glimpse of what was to come.

If you listened to the radio in 1987, you heard ‘Still Of The Night’. This lead single captured the U.S. market almost single-handedly, I remember the first time I heard the song I was floored. How could something sound so big? That first wall of guitar and then David coming in with the first few lines…..that is magic! The “stop and start” feel of the song lends a groove that you couldn’t help get locked into. You sing along, you get pumped up as the song builds. This song takes on the grandness of Led Zeppelin and fortifies it with a sonic wall. ‘Still Of The Night’ got overplayed back in the day but it’s a classic song that I still enjoy. Single number two was ‘Here I Go Again’, which actually became the big hit that propelled the album to multi-platinum status. Very sing-songy, made for radio, people that didn’t know the name of the band knew the words to the song. It’s a catchy tune, there are some keyboards here but they aren’t overbearing. The harmonies on the chorus are great and Coverdale soars throughout proving he is a great singer. Overplayed more than ‘Still Of The Night’, I skip this track when I listen to the album. The only thing worse is the Radio mix with the heavy keys that the Pop stations would play, it sounded weak. Aside from being played into the ground, my only complaint is that the band said “here we go again” and dipped into the SAINTS & SINNERS album a second time to redo this song. The general audience may have missed this fact but I didn’t when I discovered it as I backtracked through the band’s album catalog a few months later.

‘Give Me All Your Love’ was another big hit single, the fourth from the album, and is one of my personal favorites. It reminds me of SLIDE IT IN era Whitesnake as it has more bite to it without being too accessible. Another big sounding song: layers of screaming guitar, lush harmonies, and great vocals. Ballad time with ‘Is This Love’. This song cemented the band in the mainstream because every band had to have the ballad to grab hold of the girls. Sure it’s slow and soft but there is still power there. A surprisingly good performance by Coverdale, not that the guy can’t sing a ballad but more because he’s already pounded our ears five heavy crunchers. What I always found amusing was the guy who wrote this tender tune also wrote ‘Slide It In’. I usually skip this song as well because it bores me, I like it and it’s good but I’ve heard it way too many times.

“Are you ready to rock?” Anytime a song has this in the chorus, it’s a fist pumper. Right when you thought the band got all mushy, they hit you over the head with a heavy song: ‘Children Of The Night’. I like those drum rolls under that riffage in the beginning and there is one wild solo turned in by John Sykes. “Turn up the music, make it loud and proud”…..damn right David! My personal favorite is ‘Straight For The Heart’. Fast tempo with big harmonies and a sing-a-long chorus. This is another fist pounder even with the keyboards layering it, very catchy. I’m a little surprised this wasn’t released as a single. I think ‘Don’t Turn Away’ is sorely overlooked. Maybe it’s because it’s the last song, maybe it’s because the song really has no crunch but it’s a good ballad type song. It sounds a little misplaced at the end after all of the heavy songs have bombarded the ears.

Bottom Line:
In my opinion, one of the essential Hard Rock albums of the 1980s. It’s a big sounding album: awesome vocals, guitar heroics, layers of harmonies. It’s an album that blends the Blues based Rock of the ’70s with the technical prowess of the ’80s. My only problem, albeit a very minor one, is that the band dipped into a previous album for two songs. At the time, I didn’t know, so it’s not as big a deal as it would be if they covered another artist. I don’t really reach for this record that much anymore, the overplaying of ‘Here I Go Again’ and ‘Is This Love’ definitely have something to do with it. It’s excellent nonetheless. I have fond memories of this album being played over and over in the parking lots we used to hang out in at night. Imagine fifty or sixty teens, all hanging out, and rocking to the same album. It was like a mini concert! Speaking of concerts, I saw Whitesnake open for Motley Crue (GIRLS, GIRLS, GIRLS tour) at the Providence Civic Center on August 8, 1988. We were center in the 10th row and all I remember is David Coverdale whipping that mic stand around. I swear I thought I was going to get hit with it he threw it so much!

[Note: There are two versions of this album: the U.S. release (that is reviewed here) and the European release that tacked on two extra songs: ‘Looking For Love’ and ‘You’re Gonna Break My Heart Again’. You can get both of these songs on the GREATEST HITS record released in 1994.] 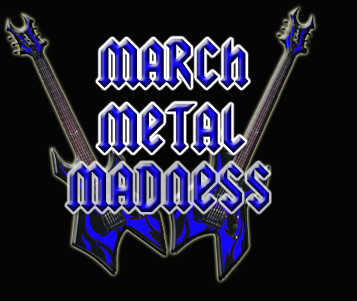 March Metal Madness has officially begun! If you read this review, you can get three more unique perspectives on this album by heading over to Hard Rock Hideout, Heavy Metal Time Machine, and Pulses, Verses, and Other Flotsam. We are reviewing one album together each Monday in March, next Monday (3/12) there will be a round of reviews on Dio – DREAM EVIL. Stay tuned and keep rockin’!