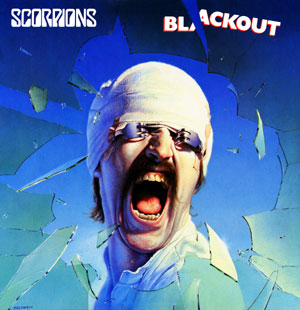 Back in 1982, I remember watching MTV and this video came on that was set in Alcatraz Prison and had a crazy guy with forks on his eyes…..’No One Like You’ was my first introduction to the Scorpions and I was hooked. Add the original album art in and the 10 year old I was bought it right away!

The album starts off with the high powered title track that is catchy and heavy at the same time. This is song is a perfect example of the potent twin guitar attack the Scorpions do so well, Schenker and Jabs maintaining the main riff and weaving in potent licks and solos. ‘Blackout’ is a driving song that retains it’s melody and remains heavy.

‘Can’t Live Without You’ follows the title track and continues the melodic heaviness with a sing-a-long chorus that is a concert staple to this day. Again, the main riff is so solid and chugs right along allowing another guitar layer over the top. Best solos on the album featured here.

‘No One Like You’ was the band’s breakthrough in the U.S. and sent many of us young MTV generation addicts straight to the record store. Combining a Pop sensibility and melodic hooks, this song was clearly the big hit it was to become. Very simple lyrically but it is delivered with an intensity by Klaus Meine that makes the song sound bigger.

‘You Give Me All I Need’ slows down to a mid-pace, almost ballad like, tempo until the main riff from the intro kicks into the chorus. I look at this song as the bridge between the 1970s Scorpions ballads and the ones to follow from 1984 on. It comes off as hard, catchy Pop but still retains a grit from the band’s early years before Matthias Jabs took over guitar duties in 1979. The chorus is extremely basic, just repeating the title over and over, but Klaus’ performance is solid as he shows he can go to a slow pace and kick it into high power right away. Hard to believe he had surgery on his vocal chords prior to this album’s recording.

To this day I’ve never liked ‘Now!’. It’s a very fast song with some blistering solos but it just sounds too busy, too frantic. I think it’s heavy and fast just to be heavy and fast, not much melody as on the first four tracks. Can anyone tell what Klaus is singing on the first listen? I sure couldn’t then and I still have a hard time today, the pace and the accent make it a jumble. Thank goodness for lyrics in the liner notes!

The heaviness continues with ‘Dynamite’, one of the most underrated songs on the record. Solid guitars and a pounding drum sound drive this song with speed and precision. The frenetic pace is equalled by Mr. Meine but he is clearer in delivery than previously on ‘Now!’. Another concert favorite.

The Scorpions hail from Germany but ‘Arizona’ retains a NWOBHM meets L.A. Glam sound. It’s slower than the previous two tracks but not mid-paced, it’s more of a Hard Rock groove a la the mid-’80s. It’s similar to the future hit smash, ‘Rock You Like A Hurricane’ (from LOVE AT FIRST STING), as far as pace and structure but ‘Arizona’ seems to be less aggressive and more akin to ’70s flavored Hard Rock. Another gem of a song that gets overlooked because the big guns are the first three songs on the album.

Slow and brooding, ‘China White’ sounds like a heavy riff machine until the guitars cut out for Meine to sing some lines and then they kick back in. There’s a dark aura to this track, a little doom-ish and rooted in ’70s proto-Metal and Progressive. Sounds like the band circa the mid-’70s with Uli Jon Roth. The solos are slowed down but filled with power and attitude.

Ballad time! Combine early Scorpions with a preview of ballads to come and you get ‘When The Smoke Is Going Down’. This song didn’t really do it for me back in ’82, especially at the end of the album. You have heavy tunes all over this platter and you end it with a ballad? I would have put it somewhere in the middle. It’s not a bad tune but the future would prove that the Scorpions would master the ballad and leave this in the dust.

Bottom Line:
A classic album that I reach for more than any other Scorpions offering. Four of the nine songs still make it into the live set today and they are also the strongest on the record: ‘Blackout’, ‘Can’t Live Without You’, ‘No One Like You’ and ‘Dynamite’…..these are also my favorite tunes. The last great Scorpions album BEFORE they became radio/MTV darlings and the master of the power ballad. A true Metal classic!