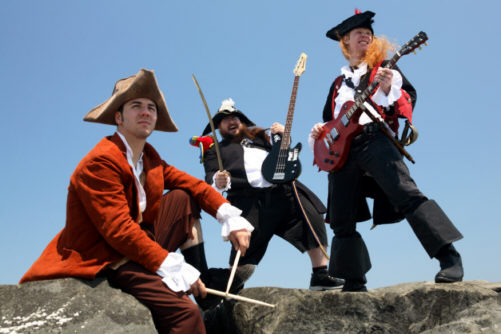 New Jersey Thrash metallers Swashbuckle bill themselves as “Pirate Metal”. An interesting concept, take one look at the album cover and band pictures and you see that the band have taken to using the pirate concept to the extreme in their indentities, costumes, language, and attitude. Heavy Metal using pirates as subject matter has been around for a long time with the German Power Metal band Running Wild…..they started things off in 1987 with UNDER GOLLY ROGER. So when I put CREWED BY THE DAMNED on the stereo and heard the opening intro ‘Under The Black Flag’, a cool Spanish style acoustic sea shanty, I figured I’d get a faster version of Running Wild. I had no idea that Swashbuckle would use a Death Metal growl!

Normally, bands that use a gimmick come off as a joke. Well, the joke is on us because ‘Welcome Aboard’ is a brutal Thrash feast with the unexpected Death vocals of Admiral Nobeard and the searing guitars of Commodore Rerum & Rowin’ Joe Po. A pirate and his ale are never parted and Swashbuckle’s ‘Drink Up’ is a celebration of just that and has become the band’s signature song with the slogan emblazoned on some of the band’s merchandise. ‘Drink Up’ is another really good old school Thrash song with big time riffs, something that Swashbuckle has all over the album.

‘Set Sail’ is another acoustic sea shanty that starts a pattern for the album. From now on, each thrash beating will be separated by this type of musical interlude using acoustic guitars, keyboards, and percussion. The instrumentals are quiet, almost soothing, and set the listener up by sailing them on calm seas and then turning them over to the dangerous waves of each Thrash storm. I like the calm sense of melody on these shanties and each one sets a mood for the overall concept. There are six other shanties after ‘Set Sail’ — ‘What A Ship Is’, ‘The Wooden World’, ‘Rum Runners’, ‘The Bazaar’, ‘Paradise Defined’, & ‘A Fool’s Errand’. Honestly, these instrumentals remind me of Rennaisance music, especially ‘The Wooden World’, and I bet these guys could also carve a career out of that type of music just like Blackmore’s Night.

Back to the Thrash, ‘Walk The Plank’, ‘Dead Men Tell No Lies’ and ‘X Marks The Spot’ continue the fast pace and it’s only now I realize that the songs are sequenced to take us on a pirate journey. We’ve boarded the ship, drank up, hit the open seas, made a traitor walk the plank, and no we have the map to the treasure. The adventure continues with more Thrash and Death vocals on ‘Upon The Spanish Main’, ‘Jolly Roger’ and the title track. Each one of these fast heavy bursts is full of speedy riffs and solid drumming that drive each song. The musicianship is pretty damn good when compared to other bands out there and the vocals, even though I expected a clean sound, suit the music’s style. Nobeard uses his growl, scream, and guttural voice to really lend an unexpected punch.

There are two untitled songs tacked on the end of the official 16 song album: ‘Pirate Jargon’ & ‘Nautical Nonsense’. I looked all over the band’s offical website for titles to these two unlisted songs but I found them at another website. Either way, it’s a nice quick double bonus! ‘Pirate Jargon’ is one of the musical interludes and ‘Nautical Nonsense’ is a quick speed burst clocking in under 30 seconds.

Bottom Line:
I didn’t expect Swashbuckle to surprise me. Not knowing anything about the band, I expected Power Metal like Running Wild and I got well done Thrash with Death-laden vocals. I like the pirate concept, it’s an idea that not many bands use today and I’m surprised because of the popularity of all the Pirates Of The Caribbean movies has really carved a new niche of entertainment. Aside from Swashbuckle and Running Wild, I could only think of Alestorm and Verbal Deception sailing the same high seas looking for plunder. Swashbuckle has raised the flag high on their mast and they are sailing along a true course and I’m looking forward to another solid record from this crew soon.

Favorite songs: ‘Drink Up’, ‘Walk the Plank’, ‘Crewed by the Damned’, ‘X Marks The Spot’…..and I like all the shanties!