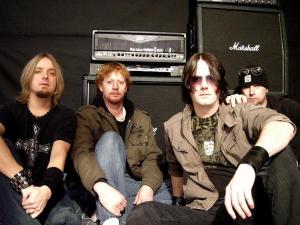 Canadian metallers Revmatic have released their third album, COLD BLOODED DEMON, and the band has taken a harder, more Metal sound than on their previous efforts: 2004’s GHETTO BLASTER and 2002’s REVMATIC. Both earlier albums were more contemporary Hard Rock than Heavy Metal but the addition of new guitarist Jay Hopkins, before the recording of COLD BLOODED DEMON, has added a new energy and harder style to Revmatic’s overall sound. There is Metal here, there is also Hard Rock, the blend makes it a very interesting listen.

Opening song ‘Head My Way’ starts the album with heavy guitars and pounding drums from Rob Baker that immeadiately reminds of Motorhead but not as dirty, especially vocally where Yetter has a clearer singing voice than Lemmy. I also detect a little Iron Maiden influence on the lead guitar, especially at the end of the song. ‘She’s A Drug’ has the same driving rhythm and energy that ‘Head My Way’ has but sounds more like a current Hard Rock song you would hear on today’s radio stations. Same thing goes with ‘Lie To Love Me’, it’s a heavy song that sounds like it could be on Rock radio alongside the Puddle Of Mudds and Nickelbacks of the world. What separates Revmatic from these other bands is the guitars, I doubt that the other two bands would want a more Metal approach.

There’s a little more melodic approach to the vocals on ‘Finally’ but the overall sound is Metal and the music has a Metallica – BLACK album influence to it while the title track kicks in with another buzzsaw riff and churning rhythm section and moves forward with raw power and energy. When Hopkins hits the solo, you can definitely hear that Phil Campbell style. Things slow down with a chugging riff on ‘Such A Disease’, it’s heavy and the drums especially pop out on this tune. There’s this enhancement on the vocals in some spots and I think Yetter sounds better without it, I guess the thing was to make those lines a little spooky but I never like that sort of thing. Ozzy did the same thing on BLACK RAIN last year and I hated it. ‘A Dying Flame’ is another heavy song in the same scope as the rest of the album, the guitar solo is excellent and the bass and drums really drive the entire song. Same goes for ‘Feel It Within’, huge guitar sound and the rhythm section sounds heavy as hell. There’s some cool quick harmonies on the chorus that sound pretty good as well.

Ending the album is ‘Bad Behavior’ and ‘So Far Away’. ‘Bad Behavior’ continues the hard & heavy Metal style but what I find really like on this song is how Keith Daigle’s bass jumps right out of the stereo speakers. What a sound! The bass isn’t overpowering, you can still hear everything else, it just really comes out and smacks you upside the head! ‘So Far Away’ leans back toward the current Hard Rock vibe that is popular right now and I wouldn’t be surprised to hear this song out there on the radio. It’s a little slower than the rest of the album but it has a solid groove and I like the cleaner guitar solo.

Bottom Line:
This has been a good year for discovering new bands and Revmatic is one of those. “High energy, raw, in your face, modern Heavy Metal & Hard Rock that you could hear on today’s Rock radio”…..that is probably the best description I can give if I were to use one sentence. What I liked best about COLD BLOODED DEMON was the guitars, especially the solos that were extremely good. You can hear the Motorhead, Metallica, & Maiden influences in all the guitar work. I thought the bass and drums were tight and made for an really powerful tandem and the vocals were pretty good although a bit shouty at times. The production was top notch, everything crystal clear, not one instrument drowning out the others, everything was well balanced to create a big overall sound. Just a quick note on the cool album artwork…..doesn’t it look like something from H.R. Giger?