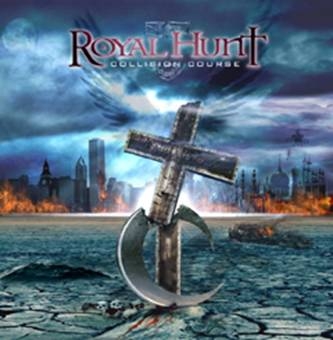 Royal Hunt has been around a long time (since 1993) but they have had the unfortunate luck of being a victim of their own success. After changing vocalists in 1995 (Henrik Brockmann out, D.C. Cooper in), the band created their two landmark albums with 1995’s MOVING TARGET and 1997’s PARADOX. Those two excellent melodic Prog/Power records propelled the band to international success and set the creative bar extremely high. Tensions within the band led to another change at the mic (Cooper out, John West in) but it seemed that the band had reached it’s creative peak. Albums like THE MISSION (2001), EYEWITNESS (2003) and PAPER BLOOD (2005) were good but it seemed as if the band had lost some of their fire.

This time around Royal Hunt is a totally different band as only mastermind & keyboard wizard André Andersen is left from the classic lineup and another change at the singer position brings former Yngwie Malmsteen/Ring Of Fire vocalist Mark Boals to the table. COLLISION COURSE: PARADOX II is the sequel to the landmark PARADOX, it’s hard enough to follow-up a band’s best album and continue a specific concept 11 years later, add another lead singer and it could all be a recipe for disaster. Fortunately the personnel changes have renewed Royal Hunt’s creative juices because COLLISION COURSE is the album fans have been waiting for over the last decade.

Just like it’s counterpart, COLLISION COURSE is a concept album based on how society views religion, specifically the idea of God. The twist is the differing beliefs and the clash between Western religions (Catholicism/Christianity) and Eastern religions (Islam). I wonder where they got this idea? The different philosophies of both religions and the struggle to coexist provides the “collision course”, a serious topic that is playing out in our world society at this very moment. The album is classic Royal Hunt: swirling keyboards, solid guitar work, a solid rhythm section and an astounding vocal performance. Add big sounding harmonies and orchestration with good songwriting and COLLISION COURSE becomes an album on par with it’s predecessor.

‘Principles Of Paradox’ opens the album as an instrumental but it does have a very melodic vocal from Mark Boals that only last about a minute. The other four minutes of the song showcase the different instrumentations and time changes that Royal Hunt have been applauded for in the past. The song moves directly into the guitar heavy ‘The First Rock’, a song that features a powerful and melodic Boals. After hearing Boals belt this song out it’s obvious that he is a natural fit with the band and can easily match both D.C. Cooper’s and John West’s range. The music never stops as ‘The First Rock’ seemlessly flows right into the melodic ‘Exit Wound’. This song reminds me of the really big sound that Royal Hunt captured in the mid-’90s with D.C. Cooper: the keyboards and guitars work in perfect harmony while the main vocals and backing tracks elevate the sound to new heights. Royal Hunt has always had excellent background vocals and there is no question that the various guest vocalists like Doogie White, Ian Parry, and original Royal Hunt frontman Henrik Brockmann add to the overall performance.

One thing I noticed is that the music never stops between each song, they all continue into each other, so the album is actually one big song with ten distinct parts. This can be a problem for sometimes but the music easily flows and retains it’s uniqueness. ‘Divide & Conquer’ is another lengthy jaunt driven by Per Schandler’s (House Of Shakira) bass, Allan Sorensen’s double-bass drumming and Boals’ high screams that moves into one of the album’s best track, ‘High Noon At The Battlefield’. ‘High Noon’ starts off with an acoustic guitar/piano intro with a very subtle vocal that brings the overall pace of the music to mid-tempo/ballad range and includes a spoken word speech that highlights the division racism places within religion. It’s a nice diversion from the constant Prog/Power musical embellishments that are in the uptempo songs, it shows a different side of the band. Moving into ‘The Clan’, the racism theme continues but the song is faster like ‘The First Rock’ and ‘Exit Wound’. The one thing I noticed right away is that the music is almost identical to ‘Wasted Time’ from 1994’s CLOWN IN THE MIRROR. It’s not a cover but a reinterpretation of the music as both songs are very catchy and melodic but with different lyrics and some slightly different musical passages. I had to put both songs on to compare and I could easily sing ‘Wasted Time’ over ‘The Clan’ in some parts. It’s interesting…..

Some Middle Eastern rhythms are prominent in the darker ‘Blood In Blood Out’ and a female vocal starts off the keyboard heavy ‘Tears Of The Sun’, another song that sounds like older Royal Hunt (I’ve tried to find a song similar but I haven’t found it…yet!). ‘Tears Of The Sun’ sounds like typical Royal Hunt musically but Boals delivers another album highlight with his soaring vocals hitting all the high notes. I think the reason I think this song sounds so familiar is the interplay between the male and female vocals, I always thought that this was a key to the band’s classic sound especially during the D.C. Cooper years. The pace slows down again as ‘Hostile Breed’ begins but it slowly builds with the emphasis on Andersen’s keys adding the Middle Eastern flavor again. The guitar solo is a little too clean here but still good and the drums begin to quicken around this time also. The pace changes throughout but some striking parts of the song are the operatic female vocals and the gang vocals that sing “Jihad” during the chorus. ‘Hostile Breed’ flows seemlessly into the keyboard heavy ‘Chaos A.D.’, a song that is more of an ending piece to the whole concept of the album, and incorporates part of the opening ‘Principles Of Power’.

Bottom Line:
Royal Hunt has survived another round of personnel changes and the band lineup is as strong as I’ve ever heard. Adding Mark Boals as the lead singer is a smart move, he is a very underrated singer and fits the dramatic Royal Hunt style. The band has continued the concept of the first PARADOX album from eleven years ago and built a solid sequel that is much better than their last three studio albums (ask Queensryche how hard that is to do!). There are a couple of average songs but the overall album ties it all together in one solid package. One of the best albums I’ve heard all year!