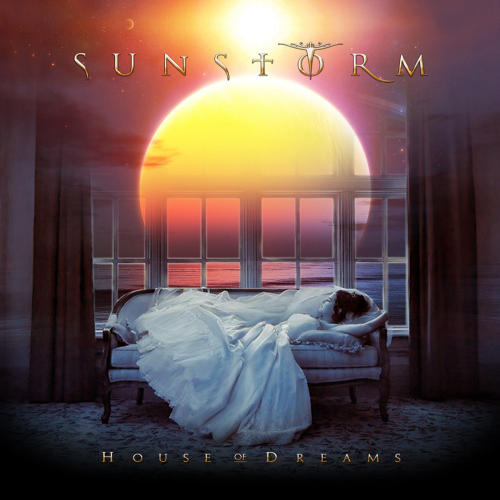 “Joe Lynn Turner has one of the best voices in the Rock world. Doesn’t matter who you put him up against, JLT has one of the smoothest voices and it keeps getting better album after album.”

I stole that line from my December 2007 review of the last Joe Lynn Turner solo album, SECOND HAND LIFE. That album was so good that it threatened the Scorpions’ excellent HUMANITY HOUR 1 for my top album of 2007. The bottom line is this: no matter what Joe Lynn Turner puts his voice to (Fandango, Rainbow, Deep Purple, Yngwie, solo or voiceover work), it’s always going to be a great performance. Sunstorm is not a band but more of an album project. The original idea came from Frontiers Records president Serafino Perugino to have JLT complete unfinished demos from his shelved mid-’80s solo album, the follow-up to the excellent solo debut RESCUE YOU (1985). The self-titled Sunstorm debut was released in 2006 and it was one of the best Melodic Rock albums of the year full of melodic hooks, guitar and keyboard driven songs and solid ballads all delivered with the smooth as silk Joe Lynn Turner vocals. The first release was a great album so a follow-up was a no brainer. JLT is always at his best doing early ’80s AOR/Melodic Rock and the latest Sunstorm release, HOUSE OF DREAMS, is another high quality album in the extensive JLT discography. Joining JLT in the songwriting department are some notable names in the AOR world: Paul Sabu, Jim Peterik from Survivor, Russ Ballard and Desmond Child among others. With songwriting partners like that, you know the songs are high quality and extremely melodic.

Kicking the record off is ‘Divided’, a melodic rock song that blends the guitars and keyboards perfectly for that true ’80s AOR sound. ‘Divided’ is uptempo and shows some muscle but it sounds so smooth with JLT’s vocals…..put this on the radio in 1985 and you’ve got a hit! Same with ‘Don’t Give Up’, pure melodic rock that has perfect production and vocals and an uptempo hook that keeps me singing right along. Slowing things down a bit, JLT and company go into a mid-tempo AOR feast with ‘The Spirit Inside’. This could almost be a revved up power ballad at times with it’s lush layered sound, JLT crooning as only he can with the smoothest delivery. Definitely a song for the lighters (or cell phones)! The pace picks up again with the fastest rocker on the album, ‘I Found Love’. Now this is a retro ’80s track if I ever heard one! The keyboards are layered all over while the guitars weave in and out around a fat bassline, all very melodic, fast and full of life. The chorus is infectious and fun…..the whole point of good Rock ‘n’ Roll.

The first true ballad arrives with the Jim Peterik penned ‘Say You Will’. This is a pure AOR ballad based on the piano and JLT’s vocals, this could easily be a Survivor song with Jimi Jamison singing., one of the best ballads I’ve heard all year! If you really want to hear how well Joe Lynn Turner can sing, play this song , he is fantastic! Another Jim Peterik written song is next, the fast rocker ‘Gutters Of Gold’. When I first saw the tracklisting for HOUSE OF DREAMS, I wondered if this was the same song as the one Peterik’s World Stage project recorded back in 1999. That song remains unreleased as far as I knw and the only way I heard it was when it was included on Melodicrock.com’s first CD. This version of ‘Gutters Of Gold’ is re-recorded and the vocals re-done by JLT so it sounds a little more aggressive than the original World Stage version. It’s a barnstormer of a song and probably the best and most memorable of the album, it’s so infectious that you can’t help singing along right away and it really sticks in your memory. The Paul Sabu co-written ‘Save A Place (In Your Heart)’ treads the mid-tempo/uptempo line carefully and is lined with piano and keyboards around plenty of guitar flourishes. It’s a cool song and has a very familiar sound, upon further investigation I found that it’s a song originally recorded in 1988 for the self-titled debut album Sabu’s Hard Rock band Only Child. Technically it’s a cover, as is ‘Gutters Of Gold’, but this is a project not a band so I’m giving a pass to Sunstorm & JLT because these songs aren’t well known and the quality of the updated performances are excellent. Either that or I’m starting to soften my position against cover songs!

More incestuous songwriting and re-recording is delivered with the JLT original ‘Forever Now’, a feel good uptempo rock song that originally appeared on Terry Brock’s 2001 album BACK TO EDEN. Technically not a cover because JLT wrote it and it’s a great song with a very uplifting chorus and harmonies. It’s a little on the “light” side for me but a lot of Melodic Rock and AOR sounds like this no matter the years so it’s still a quality song and has plenty of guitars. Proper ballad #2 is ‘Tears On the Page’ and it is another perfect Turner vocal accompanied by a piano and subtle guitars. The song is a Jim Peterik/Russ Ballard co-write so it’s extremely melodic and it has that signature Survivor style to it, again I could easily hear Jimi Jamison singing this and have it on any Survivor album. I like this ballad better than ‘Say You Will’ and both are really great. The title track picks the momentum back up again with another solid guitar and keyboard mix but it kind of sounds too similar to other songs on the album. The chorus is the highpoint and JLT puts in yet another great vocal but I’m not really getting into it. Hearing it separate from the other album tracks makes it standout more, maybe the song holds too much to the specific pattern of the album? Ending the album is ‘Walk On’, another keyboard heavy ballad that is pure AOR. No coincidence that one of the most notable songwriters of the ’80s, Desmond Child, is credited with JLT as the writers. This is another song that has made an appearance before, this time on the 1987 album FREIGHT TRAIN HEART by Jimmy Barnes. I don’t have that record (but I will look for it now!) so the song is new to me but it ends the albums on a soft note and it’s kind of a letdown, not the song but the sequence.

Bottom Line:
If you have ever heard a Joe Lynn Turner sung album then you have an idea of what the new Sunstorm album will sound like. It’s a great melodic Rock album with flawless production, great music and, of course, perfect vocals. The sound is a little dated, a little too rooted in the early to mid ’80s, but if you grew up at that time with that music then you will like this record. All the songs are well written, the list of songwriters is a testament to that, and the performances are high quality, I couldn’t find one song that I didn’t like or could be called a “filler” track. I admit that at the end ‘House Of Dreams’ and ‘Walk On’ seemed to follow the same patterns as the rest of the tracks but they are still good solid songs that could easily be a single if either the radio industry got it’s collective heads together or we turn the calendar back 20 years. This is another great album from Joe Lynn Turner and it is definitely one of the best I have heard this year.

Favorite Songs:
I like every song on the album but if I had to pick a few that stand out above the rest they would be: ‘Gutters Of Gold’, ‘I Found Love’, ‘Tears On The Pages’ and ”Divided’.