Took a quick trip to the Newbury Comics in North Attleboro, MA to see what was there and maybe pick up a couple of new releases. The last couple of times I went out on a hunt I drove the 20 mins to the Warwick, RI store because the selection and setup is better. What keeps me going back to North Attleboro is the separate Metal section and the fact that it’s less than 10 minutes from home. Here’s today’s finds…..

Brainstorm – Memorial Roots (2010) – $12: I’ve had a digital promo for the few weeks courtesy of AFM Records so this has been the main album in my daily playlist. I’m a collector so I need the physical product and I would have bought this album regardless of the digital promo because I like Brainstorm and I have most of their records. This came out in Europe in late 2009 and it’s a limited edition with 2 bonus tracks, I bought the regular 11 song U.S. edition that came out on 1/12 at a great sale price. 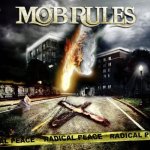 Mob Rules – Radical Peace (2010) – $12: Same situation as Brainstorm…..digital promo from AFM Records but I haven’t given it a spin yet. I would buy this CD anyway because I have been following Mob Rules since their 1999 debut SAVAGE LAND and the collection just wouldn’t be complete. Just like Brainstorm, and a few other AFM releases, RADICAL PEACE has been out worldwide since Fall 2009 but it’s official U.S. release was on 1/12. Another great sale price that saved $4 off the regular price.

Anvil – Metal On Metal (1982) – $13: I’ve been trying to replace old Anvil cassettes with the CD versions for the last year. The popularity of the Anvil documentary and the band’s resurgence has made these CDs shoot up in price online upwards to the almost $20 range without shipping. I already picked up HARD ‘N’ HEAVY (1981) and FORGED IN FIRE (1983) to replace my old tapes but METAL ON METAL is either unavailable to order or it sells quick whenever a single copy ships to the store. I saw this and grabbed it quick and saved myself $7+ compared to online prices.