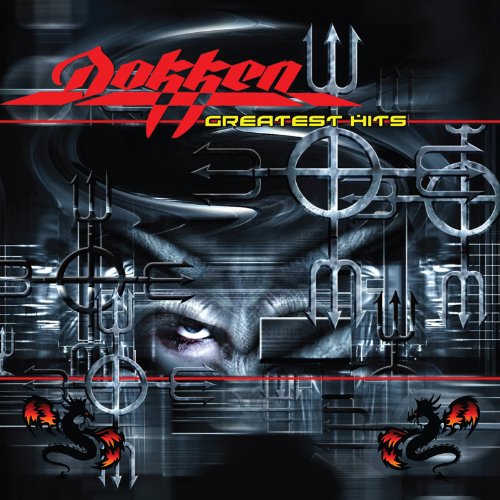 What we have here is a new Dokken greatest hits package with two brand new studio tracks. If that wasn’t enough to get you to run down to the record store (or iTunes), the ten classic songs, the greatest hits, are re-recorded by the current lineup! This is the trend lately for many bands getting offers for commercials, etc., you need you’re classic songs but you may not actually own the rights. If you use the original, your royalty rate goes down. If you re-record it, the royalty rate is better (KISS did it in 2008 and used songs for their Dr. Pepper campaign). Maybe it’s just to get a “fresh sound” of the current lineup doing the classic songs and putting the material on store shelves. If that’s the case then you can find plenty of other Hard Rock & Metal bands who have done it but…..are you tampering with a musical legacy? I’m always up for a reinterpretation of classic songs from a band because I’m curious as to what they come up with and, if I’ve seen the band in concert, if their current sound/lineup is featured prominently. I’ve been a Dokken fan since 1983 so I’ve been there straight from the beginning and I basically grew up with the songs so I know them by heart.

The ten re-recorded hits are basically performed staying true to the original version but with a bit more live feel to them, a more aggressive sound…..spending years on the road touring does that. Mick Brown is still a wildman on drums and teaming with Rock veteran Sean McNabb makes for a formidable rhythm section. Guitarist Jon Levin, who has been in the band since 2004 and recorded two studio albums, shines again! Not only does Levin faithfully reproduce George Lynch’s parts but he adds his own modern flair to each song. Most of the songs musically sound the same, or at least very close, but the defining component is Don Dokken’s voice…..or lack there of. Don Dokken is 30 years into his singing career and, after years of recording, touring and partying, the 57 year old singer doesn’t have the same set of pipes he once had. Then again, who does? A few years ago, I saw Dokken live with the Scorpions and you could just tell that Don’s voice was giving way. Then you could hear the more down-tuned lower register on the new albums rather than the higher melodic style from the ’80s and ’90s. I’m not saying Don does a bad job or that his singing is awful, it’s just that you can tell that he doesn’t have the golden voice of his youth anymore. Maybe that has something to do with the background vocals? One of the biggest pieces to the Dokken sound was former bassist Jeff Pilson’s superb backing vocals. Take a listen to the original songs and compare them to the new versions, the big lush harmonies are not there and I think Don’s lead vocal suffers from it.

The two new tracks are the major reason why I bought this CD. ‘Almost Over’ is a really good rocker written down to Don’s current vocal level but it reminds me of early Dokken circa 1983. The song sounds a bit dated but modernly aggressive with Levin’s Lynch-influenced axework, even Don’s vocal sounds very good. I could easily hear this song on either one of the last two Dokken studio records. The second new song, ‘Magic Man’, is faster and heavier and deals with the topics of drugs and addictions, maybe some self-introspection here? ‘Magic Man’ is another really good song that reminds me of early Dokken (probably due to Levin’s guitar work) but has that updated sound. Listen closely to Mick Brown’s drumming here because it’s basically a showcase on how to get it done after 30 years!

Bottom Line:
What can I say here? This is a re-recorded greatest hits with two new songs and I prefer the originals to these new versions. I like the idea, I bought into it but I would much rather have had a full new album with a couple re-recorded songs as bonus tracks. If I have the choice to hear the Dokken hits, then I am going to stick with the excellent VERY BEST OF DOKKEN (1999) compilation. To be honest, these aren’t the worst remakes I’ve ever heard but there is definitely a difference to my ears and I prefer the originals. The make or break here is the two new songs and I think they are both really good. In fact, if Dokken releases a new record with songs like this, they are going to have a great album on their hands. If I were Dokken, I’d keep going with the new material and leave the classics as they are. If you’re looking to spend the money, this is a CD for diehard Dokken fans…..as you can see, I’m a diehard. I would go for the 1999 best of CD for a great overview of the hits.