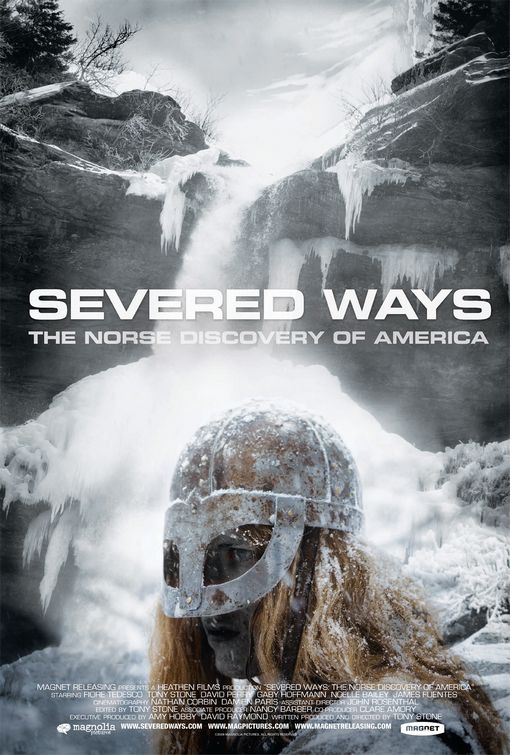 I enjoy good movies but I’m hardly film aficionado. I took a few film classes in college and I did well in them so I understand, and look for, things that most people might miss when they sit in front of the screen and veg. I enjoy independent films because most offer an alternative point of view and/or subject matter than big budget blockbusters that Hollywood crams down our throats. I got my first exposure to SEVERED WAYS through a news item I read at Bravewords.com that included the two trailers (first one is normal, second is Metal):

Anything that combines Metal music to a unique film concept is right up my alley so I’ve been anticipating watching this DVD for a few weeks. Once I got my copy in my DVD player I kicked back and watched one really good independent film! The film centers around two Viking explorers that have been abandoned by their expedition after a losing battle with the natives (Skrealings) of this newly discovered land (North America). The film tracks their survival and journey as they try to make their way North to rejoin their comrades. The Vikings hunt, build shelter, encounter Christian priests (complete with a church burning), and ultimately meet their demise. The plot doesn’t seem like much but it’s the realism that really hooks you in. Nothing is as real as watching the Vikings survive in the lush forest landscape from their hunting and fighting to actually taking a dump and wiping off with leaves! Honestly, I could have done without a Viking taking a dump but think about it…..isn’t that something that would need to be done? The fight scenes and the killing that is done in the film is brutal in it’s rawness but not gory like a B Horror flick. It’s all about bringing the viewer into the adventure with as much reality as possible. I don’t want to simplify everything here but that is essentially the plot, there really isn’t too much to it. The sub-plot is each Viking’s personal attitudes and their personal journey of self-awareness.

What makes the film for me is the way it was shot. Obviously this isn’t a Hollywood action flick with millions behind it but I liked the way director Tony Stone used regular cameras as well as handhelds to give the proper perspective. When watching scenes from the handheld cameras you get the sense of urgency and the sense of actually being in the thick of the forest as the events unfold. I also like the fact that there was minimal dialogue and that the actors spoke in what seems to be a Norse language but the subtitles kind of kill the vibe. The film is all about authenticity and realism, I would have rathered heard the dialogue with no subtitles so I could interpret the communication my own way. There is a particular scene in the beginning where the Vikings are feasting on some game and one turns to the other and mentions how “killer” the food is. “Killer”! Seriously, couldn’t someone come up with something less Hot Topic!

The Metal aspects of the film are obvious. First…..Vikings! If there was ever a subject that the Metal world understood it’s Vikings. Second…..Norse mythology vs. Christianity. If there’s another subject that the Metal world undertands it’s Norse mythology. Take a look at most of the Scandinavian Black Metal scene and there are plenty of examples and influences of how pro-Norse/anti-Christian attitudes permeate the music. Third…..the soundtrack. It’s a more subdued Metal soundtrack than I expected, more atmospheric and ambient but still containing the heaviness of Old Man’s Child, Dimmu Borgir, and Burzum among others. There is one scene that seems way out of place…..the headbanging scene in Chapter 2 – Camp. In Chapter 1 – Stranded, the Viking pair make a shelter to survive. At the beginning of Chapter 2, the shelter is built, the Metal music starts out and you see the Viking called Orn headbanging in celebration. Totally out of place! Why go through all the effort of being as authentic as possible and then put in a quick scene of a Viking rocking out?

Bottom Line:
I really enjoyed SEVERED WAYS because of the way the film was presented, the more real it became the more I liked it. The actors did a great job and the way the film was shot added to the realism of being stuck in primitive North America in 1007 A.D. There really isn’t anything Metal about the film except for the underlying soundtrack but it is a cool connection with the Norse theme. If you’re looking for a fantasy based epic from Hollywood then this isn’t the movie for you. If you’re looking for some sort of Heavy Metal themed video, this isn’t the movie for that either. What you get is a basic journey of two stranded Vikings in a foreign land: they eat, they sleep, they crap, they kill, they die. It’s all very basic but the way it’s all presented is the key. Well worth checking out…..