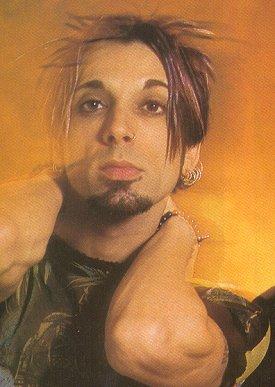 On Saturday, October 27, 2007, Enuff Z’nuff drummer Ricky Parent lost his battle with cancer and passed away at the young age of 41. My sympathies to Ricky’s family and friends, may they find strength at this sad time.

It’s with a heavy heart that I report that Enuff Z’nuff drummer Ricky Parent passed away on Saturday after a long battle with cancer. Normally you would now find some biographical information but I knew Ricky and would like to first say a few words.

The one thing I will always remember about Ricky is that unfailing smile. There could be some of the usual rock n roll drama going on around him but that smile would never fail. Aside from that smile, he always impressed me because he honestly did live for the stage. He could be playing for thousands of people or a couple hundred and you could always see the excitement in his face as he sat behind his drum kit. I remember seeing the band during the “Tweaked” tour and Ricky was sounding amazing as usual only to find out after the show that he was playing with a broken foot. But that was just the kind of guy he was, he wouldn’t let a little thing like a broken foot keep him off the stage and playing for his fans.

And I know it does sound cliché but he truly did love his fans. As Chip once told me, “they were like oxygen to him.” At every show you always knew where you could find Ricky before and after the show and that was out with his extended family, the fans.

You can never really convey what someone meant to the people that love him with a few written words. Those that knew him were blessed and really did have their life enriched by having him in it. That goes beyond all the BS in the world of rock n roll, Ricky was a rarity in the cynical business of music, a genuine man on and off the stage. While the rigors of the quest for rockstardom turn many jaded, Ricky never lost his love for the music.

Ricky Parent was born in Passaic, New Jersey. His spent his childhood in New Jersey and New York before he headed to Los Angeles to follow his rock n’ roll dream. According to Enuff Z’nuff fansite EZNExpress, Ricky was just 5-years-old when realized his love for the drums. One day he was in the yard playing football when he heard a marching band playing down the street. Mesmerized by the sound he found himself following it to discover what was creating that beat. Once he found out, he was hooked and like many young aspiring drummers he first turned to the ready made drum set in any household; pots and pans. Seeing the young drummer in the making he was giving his first drum set, a Mickey Mouse toy set which fueled his dream for a short while before he destroyed it. He then graduated to a Del Ray set that was covered in black contact paper but had cymbals and a snare. From there he pursued his passion with a vengeance, learning his craft from a combination of lessons, drum clinics, but primarily learning from records and songs on the radio.

“My main influence is probably John Bonham,” Ricky wrote on his Myspace page. “But I’ve gone through a bunch of phases from jazz Buddy Rich, Tony Williams, etc. Progressive Rock Terry Bozzio, Simon Phillips to Ringo to Ansley Dunbar, etc pretty much listened with an open mind soaking up what I admired and working it into my own.”

Like many of his generation when the time came to follow his muse in rock n’ roll he headed to Los Angeles. He was quickly established as world class drummer and got his first high profile gig with War & Peace, a band fronted by Jeff Pilson after he left Dokken that also featured Tommy Henricksen (P.O.L.) and Russ Parrish (Halford, Fight). The band was short-lived and disbanded after grunge revolution made it hard for them to get noticed. When Vince Neil left Motley Crue, Ricky was called on to lay down some drum tracks for Vince’s solo project. Ironically, Neil would soon hire away Enuff Z’nuff drummer Vikki Foxx.

At the time Ricky was playing in a jam band with Paul Gilbert and when word went out that Enuff Z’nuff were looking for a new drummer, Gilbert and Mike Varney the head of War & Peace’s label Shrapnel Records, recommended Ricky to the band. He soon after relocated to the band’s home base of Chicago becoming an official member in 1992 where he was a mainstay of the group on stage and in the studio until 2004 when he took a leave of absence after being diagnosed with cancer.

Over the years Ricky was involved in other bands and projects including a brief stint with Alice Cooper as well as playing with Sass Jordan and Tod Howarth (Frehley’s Comet).

At press time the details about a memorial were not known. Enuff Z’nuff plan to release a statement within a few days so we should know more later in the week.